your blobbiness contents me and rejuvenates me inside. Your slight squish makes me happy and usually drives away those around me. Your greenish color makes me satisfied. Your sweaty, wet, gym-sock smell makes me gorgle with contentment.

when I throw you, you splatter like an enemy from Gears of War on my garage wall. You explode like a liver when filled with C-4. You cannot be destroyed, for you are easily re-made.

You are the best blob made in existence. Better than that blob I put in my armpit ten years ago. Oh wait… you are that blob. 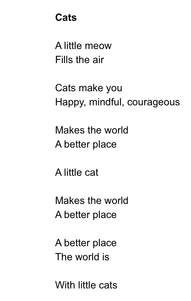 Cats by: Annika
Oh Christmas You make me so happy Bright lights and twinkling smiles Gleaming Christmas trees And without you smiles Would die Christmas Carols would stop Cookies would stop smelling up the houses Elves would stop moving around and then there would be silence Oh Christmas -anonymous


“Kiera! You have to come see this, I think you’ll be happy!” Brendan shouted abruptly. I stood for a second letting my heart regain consciousness then sauntered downstairs. Brendan pointed out the window, and that is when I saw her. A tiny golden puppy, sticking its head out the window of my dad’s car.
-submitted by Kiera

Who Am I? Poems by the Koala cluster

"Sit In Article"
by Maeve K. and Morgan K.

On March 14, 2018, many Blake students took part in a seventeen-
minute sit-in in the Blake Middle School gymnasium. Some students went to show their
opinions on issues like gun control, but all wanted to honor the seventeen students who
lost their lives during the Parkland shooting in February. The gymnasium was packed as
students gathered en masse, sitting on both the floor and risers. As a student
organizer’s voice boomed over the crowd, the chatter swiftly subsided. A somber mood
rushed over the crowd. Every minute, a victim’s name was called out. Our school wasn’t
the only one to take part in an activity honoring the lives of the children who were killed
at Parkland; schools across the country participated in similar events. Many students
worldwide did a walk out to honor the seventeen victims. However, not every school is
as accepting as Blake. A simple search on Twitter can show a numerous amount of
tweets from schools prohibiting students’ walkouts and protests. While Blake students
feel lucky for the opportunities they have, they have shown immense respect for other
schools’ right to determine the safest option for their students. Dominic Bartolata, a
Blake student, remarked that he was “sure that (the schools) have their reasons to back
them up”. Mr. Vaughn remarked that “Each school is different... but I feel it’s important
for each student to have their voice”. He also commented that “I was very proud of (the
students)... I thought they came together in a meaningful way... I appreciate their
respect and seriousness for the school”. The Sit-In was a binding event where students
came together to make a difference, all while honoring the seventeen students who lost
their lives. 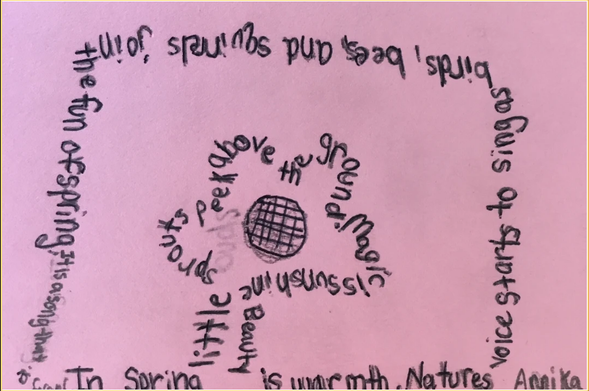 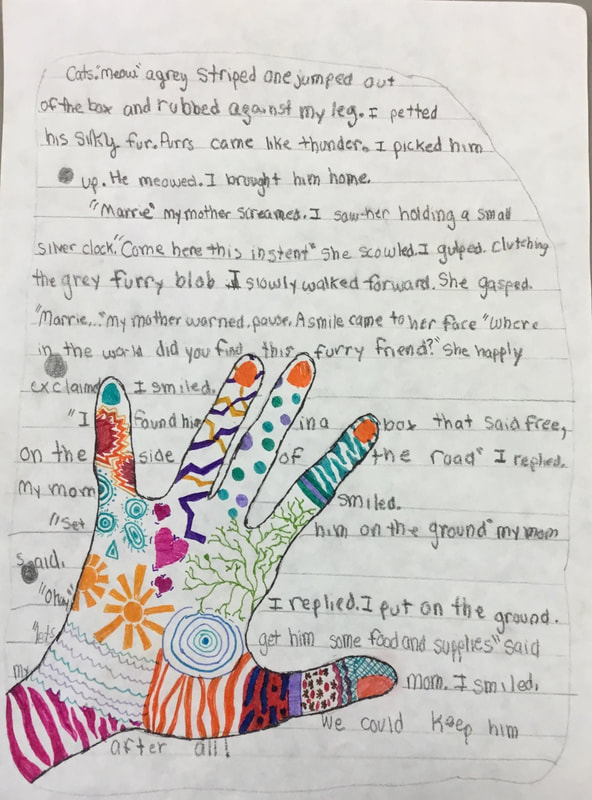 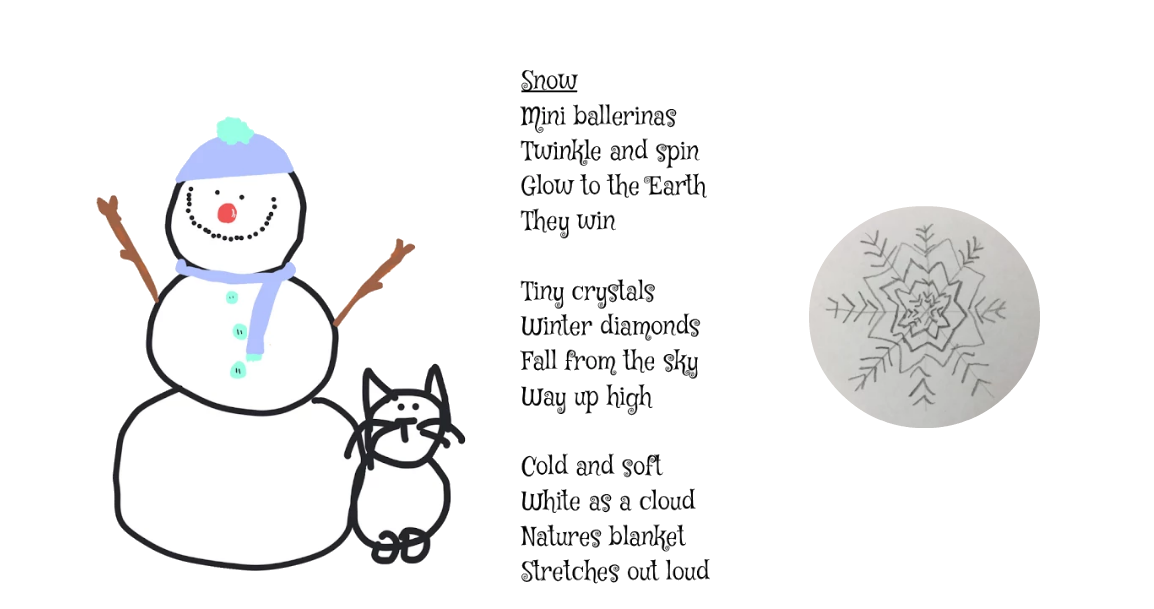 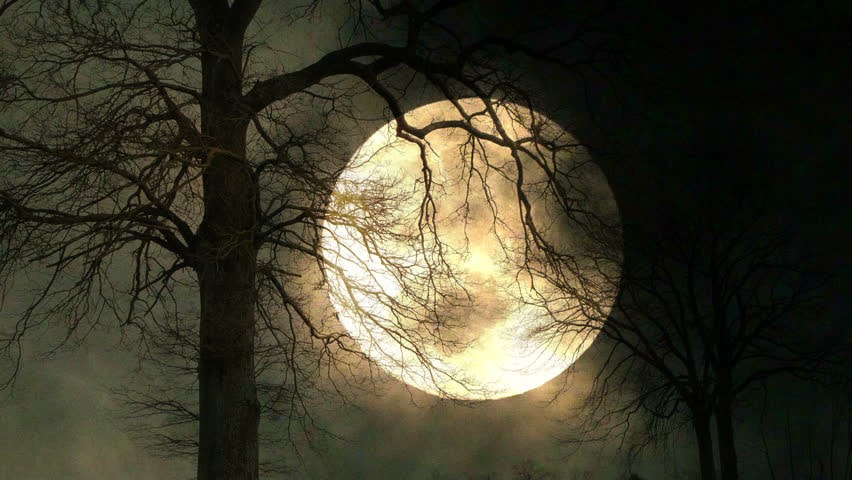 This story is from Mr. Walkawicz.

Let Me Walk You Home
Some students had gone missing. One… then another… then another… Still, Teresa ignored her professor’s advice. “I’ll be fine,” she said. “My apartment is just at the edge of campus.” Picking up her anatomy books, she waved goodbye, giggled, and pushed through the revolving doors that connected the lecture hall to October. Home was not far — ten minutes, maybe, if you were in a hurry. But tonight, Teresa took her time. Breathing in the sweet aromas of autumn, she let her fingers caress the foliage; the leaves were orange and crimson, and, as she left the different batches of color, they seemed as if to shiver. High above, making silhouettes across the moon, the naked branches moved back and forth in the wind.

Were they waving? Were they trying to shout some kind of warning? There was a rustle. In the bushes. A young man. He tumbled onto the sidewalk. “Oh, hey!” he remarked. “So sorry to frighten you! I… I didn’t see you there. I was just looking for my, uh, I.D. card. I… I think I lost it …” Teresa clutched her books against her chest. The young man looked around at the dimly lit street. “Are you alone?” he asked. There was no answer. He turned back to Teresa, to inspect this delicate creature. The moonlight painted the edges of her skin silver. She blinked. “Uh, yes… I’m alone. Why?” He smiled. “Well… I mean… it’s not safe… for a pretty girl like you…” Teresa raised her eyebrows. “A pretty girl like me?” The young man inched closer. “Times are crazy. Here, let me, uh, walk you home.”

Teresa studied her suitor, every part of him: his perfectly white sneakers, his high socks, his Bermuda shorts, his lacrosse-T, his blue eyes. He flashed her a charming smile, and then placed a hand on her shoulder. The wind screamed through a nearby fence. She smiled. “Sure.” And so, the two of them continued. They joked, and laughed, and shared spooky stories. What fun! How relaxing! Eventually, when they reached Teresa’s place, they stopped upon the steps. Her apartment was small and covered in old vines. There were no lights on. The young man spoke first, “Do you… mind if I… come in… just to, you know, use the bathroom?” Teresa giggled, as she always does. Her cheeks turned red. She beamed. She nodded. And then, excitedly, she pulled out the keys from her jacket pocket, turned around, unlocked the heavy oak door, creaked it open, and, very graciously, ushered the young man inside.

​ HE was never seen again.